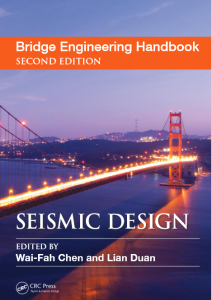 Throughout the history of civilization bridges have been the icons of cities, regions, and countries. All bridges are useful for transportation, commerce, and war. Bridges are necessary for civilization to exist, and many bridges are beautiful. A few have become the symbols of the best, noblest, and most beautiful that mankind has achieved. The secrets of the design and construction of the ancient bridges have been lost, but how could one not marvel at the magnificence, for example, of the Roman viaducts?The second edition of the Bridge Engineering Handbook expands and updates the previous edition by including the new developments of the first decade of the twenty-first century.

Modern bridge engineering has its roots in the nineteenth century, when wrought iron, steel, and reinforced concrete began to compete with timber, stone, and brick bridges. By the beginning of World War II, the transportation infrastructure of Europe and North America was essentially complete, and it served to sustain civilization as we know it. The iconic bridge symbols of modern cities were in place: Golden Gate Bridge of San Francisco, Brooklyn Bridge, London Bridge, Eads Bridge of St. Louis, and the bridges of Paris, Lisbon, and the bridges on the Rhine and the Danube. Budapest, my birthplace, had seven beauti-ful bridges across the Danube. Bridge engineering had reached its golden age, and what more and better could be attained than that which was already achieved?Then came World War II, and most bridges on the European continent were destroyed. All seven bridges of Budapest were blown apart by January 1945.

Bridge engineers after the war

Bridge engineers after the war were suddenly forced to start to rebuild with scant resources and with open minds. A renaissance of bridge engineering started in Europe, then spreading to America, Japan, China, and advancing to who knows where in the world, maybe Siberia, Africa? It just keeps going! The past 60 years of bridge engineering have brought us many new forms of bridge architecture (plate girder bridges, cable stayed bridges, segmen-tal prestressed concrete bridges, composite bridges), and longer spans. Meanwhile enormous knowl-edge and experience have been amassed by the profession, and progress has benefitted greatly by the availability of the digital computer. The purpose of the Bridge Engineering Handbook is to bring much of this knowledge and experience to the bridge engineering community of the world.

The contents encom-pass the whole spectrum of the life cycle of the bridge, from conception to demolition.The editors have convinced 146 experts from many parts of the world to contribute their knowledge. and to share the secrets of their successful and unsuccessful experiences. Despite all that is known., there are still failures: engineers are human, they make errors; nature is capricious, it brings unexpected sur-prises.! But bridge engineers learn from failures, and even errors help to foster progress.The Bridge Engineering Handbook, second edition consists of five books:FundamentalsSuperstructure DesignSubstructure DesignSeismic DesignConstruction and Maintenance.